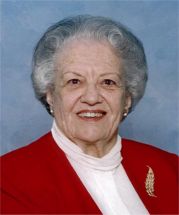 Fletcher - Dora Blake Eckstine, 83, of Wilkie Way, died Thursday, December 25, 2003, at her residence. A native of Marshall County, West Virginia, she was a daughter of the late Frank W. and Retha McCosh Blake and wife of the late Joseph Wilbert Eckstine, Jr., who died in 1972. Mrs. Eckstine was a member of Skyland United Methodist Church and the Order of Eastern Star. She is survived by two daughters, Marilyn J. Eckstine of Atlanta, Georgia and Susan E. Riddle, and her husband, Rick G. Riddle, of Fletcher; four grandchildren, Amanda D. Riddle of Denver, Colorado, Sgt. Joseph G. Riddle of Schofield Barracks, Hawaii, Frank C. Riddle and Allison B. Riddle of Fletcher; a great-granddaughter, Hailey E. Riddle and a sister, Dorothy B. Gorby of Naples, Florida. Funeral Services will be held at 2 pm Sunday in the Skyland United Methodist Church conducted by the Rev. Arnie Corriher. Burial will be in Dallas, West Virginia on Wednesday, December 31, 2003 under the direction of Kepner Funeral Home. Her family will receive friends from 4 pm until 5:30 pm Saturday at Groce Funeral Home at Lake Julian, where Mrs. Eckstine will remain until being placed in the church 30 minutes prior to the service Sunday. Her family will also receive friends at Skyland United Methodist Church on Sunday following the service. In lieu of flowers, memorials may be made to Four Seasons Hospice, P.O. Box 2395, Hendersonville, NC 28793.