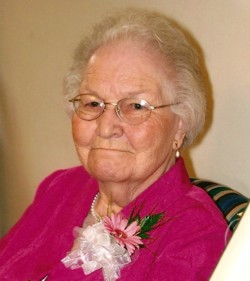 DOROTHY ROBINSON ASHEVILLE - Dorothy Battle Robinson, 89, formerly of 178 Starnes Cove Road, Asheville, died Thursday, September 9, 2010 at Pisgah Manor. Mrs. Robinson was born in Haywood County. She was a daughter of the late Thomas and Arie Grant Battle. She was preceded in death by her husband, Harry Crate Robinson and nine siblings. Surviving are two daughters Rebecca Bumgardner and her husband Eugene of York, SC, Rena Hollifield and her husband Russell of Asheville, four grandchildren, Benjamin Bumgardner and wife Courtney, Beth Aron and husband Gavin, Harrison Bumgardner, Meghann Pegram and husband Lee. "Miss Dot" as she liked to be called, was a very active member of Starnes Cove Baptist Church. She served as church clerk for many years. She was the Sunday School Secretary until her recent illness. She loved to sing in the choir and served as the unofficial "Choir advisor." Her love for books caused her to have a vision for a church library. She worked to see it in place. Bowling on the church league was a favorite activity of hers for many years. She supported the church softball teams by faithfully attending the games. She was an active member of the church's Senior Citizens group. Mrs. Robinson was employed at S.H. Kress for more than 25 years. She later retired from the Square D plant. Funeral services will be at 4:00 p.m. Sunday at Starnes Cove Baptist Church with the Rev. Charlie Sams officiating. Burial will follow at Pisgah View Memorial Park. Her family will receive friends at the church one and a half hours prior to the service and at other times at the home of Rena and Russell Hollifield, 37 Spreading Oak Lane. Memorials may be made to Starnes Cove Baptist Church, 149 Starnes Cove Road, Asheville, NC 28806.