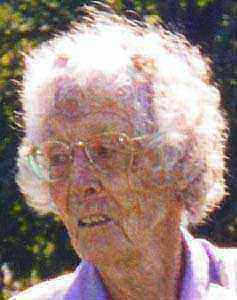 Dossie Beaver Byrd, 97, of Candler, passed away Wednesday, May 18, 2005. For more than 70 years she was a driving force in the Acton Community of Enka-Candler. A native of Buncombe County, she was the daughter of the late Samuel and Mary Elizabeth Beaver. She was a graduate of Asheville-Biltmore College (UNC-A) and married Alvin Byrd, a foreman at American Enka, who died in 1961. Dossie was very active for 40 years with the local Girl Scouts, Quota Club, March of Dimes, ABCCM, and United Methodist Women and wrote newspaper articles for the Enka-Candler Enterprise. She was also a salesperson for Junior Miss and for Tru-Fitt Fashions. She enjoyed working in her yard and writing poetry. Surviving are her daughter, Barbara Byrd Cole; grandchildren Jennifer B. Messick and Stephen H. Cole of Asheville; great-grandchildren, Alvin Shultz, Sonya Martin, Andre Shultz, Lindsey Briggs, Chris Sigmon, and Betsy Buckingham, and six great-great-grandchildren Sydney, Kristen, Scout, Carson, Trey and Max. Her family will receive friends from 1:00 to 2:00 p.m. Friday at Acton United Methodist Church. The funeral service will be at 2:00 p.m. Friday at Acton United Methodist Church with the Rev. Paul Hacklander officiating. Burial will be in the church cemetery. Memorials may be made to the L. Dale and Mary R. Thrash Memorial Education Fund c/o Acton United Methodist Church, 171 Sand Hill School Road, Asheville, NC 28806. The family wishes to acknowledge the special care given to Dossie by Carolyn Davis and Deana Banks.