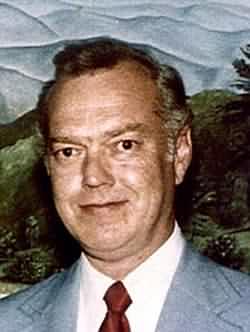 Douglas Melvin Clark, of Old Leicester Highway, passed away Wednesday, January 3, 2001. A lifelong resident of Buncombe County, Mr. Clark was a member of Enka Baptist Church and a Magna Cum Laude graduate of Western Carolina University, where he also received a Masters Degree in Investment and Finance. Mr. Clark was formerly employed by The American Enka Corporation in the early 1960’s and later became Human Resources Manager in the early 1970’s. He was currently a Real Estate Appraiser and licensed Real Estate Broker for over 25 years. He served in the US Army during the Korean Conflict. Mr. Clark was active in the Democratic Party, serving as a former President of the North Carolina Young Democrats, campaign chair for Bob Scott’s campaign as Governor of North Carolina, a charter member of the Buncombe County Democratic Men’s Club where he held various offices and currently served on the Board of Directors, and was former Precinct Chairman for Lower Hominy #2 Precinct, and current precinct chairman for West Buncombe #2. Mr. Clark was former Chairman of the WNC Regional Air Pollution Control Board and currently a member of the Board. He also was a member of the Environmental Assessment Association and current member of the Asheville Board of Realtors, and was designated a Kentucky Colonel by the Commonwealth of Kentucky. Mr. Clark was preceded in death by his mother, Eunice Worley Clark and father, Homer S. Clark both of Asheville; and also by a sister Freda Clark Gregory of Merced, CA. He is survived by one daughter, Laura Ann Clark of Candler; one brother, Thom R. Clark of Lavonia, GA; one aunt, Edith Worley of Leicester; one uncle, Ray Worley and wife Alma of Leicester; numerous nephews, nieces, cousins and a very special dearest friend, Kay Fortney of Asheville. Mr. Clark will be missed by family and his many friends, and remembered for his love of the Western North Carolina Mountains, his appreciation of fine arts and literature, and for the truly gentle man that he was. Funeral services will be held 1:30 p.m. Sunday in the Patton Avenue Chapel of Groce Funeral Home with Reverend Ron Brown officiating. Burial will be at Paynes Chapel Church in the Sandy Mush Community. The family will receive friends 7-8:30 p.m. Saturday at the funeral home. Memorials may be made to the North Carolina Arboretum at 100 Frederick Law Olmsted Way, Asheville, NC 28806.