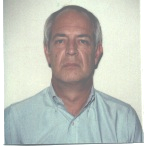 John Cloyd, 60, of Hendersonville, pased away peacefully January 10, 2005, after a long battle with cancer. He was born in Jonesborough, TN and was the son of Emily Duckworth Cloyd and the late John Cloyd, Sr. of Jonesborough. He is survived by his wife of eleven years, Shirley Pearson Cloyd. He leaves behind a daughter Jennifer Konomos and her husband Bill of Knoxville, TN; a son Charles Cloyd and his wife Melanie of Mullica Hill; two step-daughters, Dena Bryson and her husband Doug of Asheville and Kim Morse and her husband Wes of Flat Rock; two sisters, Betty Jo Dempsey and her husband Darrell and Billie Jean Osborne and her husband Ray; a brother James Cloyd and his wife Chere; his special cousin Phyllis Crain; his friend Kenneth Rawles; a niece Melissa Cloyd and a nephew Daniel Cloyd; an aunt Marylee Stewart and her husband Alex, all of Tennessee. He is also survived by three precious granddaughters, Amelia Konomos and twins Thea Rose and Lillian Elisabeth Cloyd. John grew up in Jonesborough, TN and graduated from ETSU with a BA in Chemistry and Math. He received his doctorate in organic chemistry from Ohio State University. He did post doctorate studies in England at the University of Manchester Institute of Science and Technology and at the University of Georgia. John was employed with Dupont as a chemist for 23 years. In 1998 he took early retirement and in 1999 he purchased a "Pillar to Post" franchise and began a home inspection business. He loved his work and all the special realtor friends he made over the past five years. John was a cat lover, avid skier and gardener and enjoyed carpentry, fishing and spending time with his daughter and three grandchildren. He had recently moved into a new home he and his wife built together. John was of the Christian faith and recently gave his life to Christ. Groce Funeral Home at Lake Julian will be handling a private service for the family with the Rev. Sonja Burleson and Pastor Noah Barefoot officiating. Burial will be at Green Hills Cemetery. No visitation or graveside services are planned. In lieu of flowers, the family asks that memorials be made to the American Cancer Society, 120 Executive Park, Building 1, Asheville, NC 28801, or to Elizabeth House at Four Seasons Hospice, PO Box 2395, Hendersonville, NC 28793.