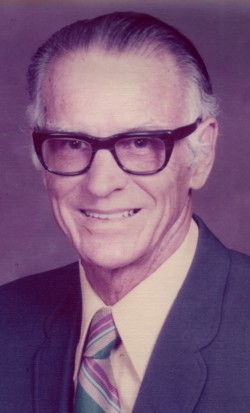 Drew C. Nichols, 97, of Asheville, died Tuesday, January 22, 2008, at the WNC Baptist Home. A native of Crowell, TX, Mr. Nichols was a son of the late Robert Lee and Mary Frances Elliott Nichols. He was also preceded in death by his wife, Anna O'Connor Nichols; seven brothers, and one sister. He was a graduate from the University of Texas, where he was a handball champion. After coming to Asheville, he worked for the Social Security Administration as a Regional Rep, traveling though all types of weather to help people qualify for and receive their benefits. Mr. Nichols could be heard on the radio and read in the Asheville Citizen-Times regarding S.S. benefits, keeping people informed until his retirement. In his later years, he learned the sport of tennis and in his mid 80s was a regional senior tennis champion. In his personal life, he and his beloved wife, Anna, loved to travel all over the country. A true patriot, Mr. Nichols loved his country, and took a great interest in American politics, always staying informed. He devoted numerous years to writing many songs about his childhood, his relationships, and his country, and was always working tirelessly on his novel, seeking perfection on it up until the last week of his life. Mr. Nichols was a veteran of the U.S. Army, serving in WWII. He was also a member of First Baptist Church of Asheville for 50 years. Mr. Nichols is survived by two sisters-in-law, Mary O'Connor Jamerson, of Asheville, and Nell R. Nichols, of Austin, TX; and many nieces and nephews. A funeral service will be at 2:00 p.m. Monday at the Groce Funeral Home chapel on Patton Ave. with the Minister Donna Painter, of First Baptist Church of Asheville, officiating, with participating family members. Interment will follow at Forest Lawn Memorial Park. His family will receive friends for half an hour prior to the service. Memorials may be made to Hearts With Hands, P.O. Box 6444, Asheville, NC 28816. Mr. Nichols had brothers who were Baptist preachers, one even serving in China. Drew said that as a young man, he had professed Jesus Christ as his Lord and Savior. As he grew older, he became a critic of certain aspects of Christianity. But, within a year of his death, his testimony to his family members was that he had come back to the Lord, and his life manifested the peace and joy of the Lord. Mr. Nichols would often sing Christian songs and other songs that he liked, bringing joy to the working staff of the WNC Baptist Home.