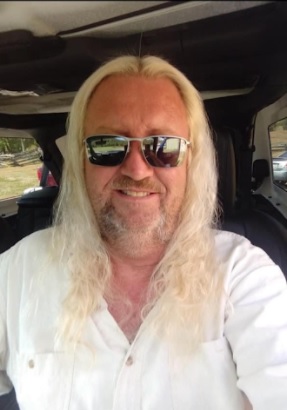 Dwayne Burnette Burleson, of Candler, NC, passed away peacefully on August 18, 2021, after a harsh battle with Covid-19 and a lengthy illness.

A lifelong resident of WNC, Dwayne was born January 6, 1964 in Marion, NC, to the Lorene Ford Bradford and Burnett Burleson. Dwayne was a 1982 graduate of Erwin High School, where he formed so many lifelong friendships-the kind of friend that stayed in his life and by his side until the end. He attended St. Joan of Arc Catholic Church in Candler.

Dwayne attended ABTech, where he studied computer technology. However, his love for the great outdoors took him away from sitting behind a computer for many years. He worked for the family business, “Burnette’s Paving Co.”, for over 25 years. Later he worked as a service writer for several car dealerships.

Dwayne spent countless hours grooming the appearance of his yard. Music was not a hobby – music was his life! He loved all things with wheels, cars, his motorcycle and the brothers and sisters he bonded with. He loved his family, long rides, beautiful scenery, lakes, rivers, waterfalls, fall leaves and campfires with family! Although he found beauty in so many things, he loved his family more than anything in the world.

Funeral services will be held at 2:00 p.m. on Monday, August 23, in the Patton Avenue chapel of

Groce Funeral Home. Burial will follow at Forest Lawn Memorial Park in Candler. A long train of motorcycles are welcome and appreciated.

The family will receive friends one hour prior to the service, beginning at 1:00 p.m.