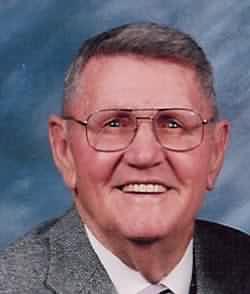 Mr. Clontz was born in West Asheville and was a son of the late William L. and Arie Loduskie Hooker Clontz. He was an Army veteran of WW II and was retired from American Enka. He was a member of the Candler Lions Club and a member of Deaverview Baptist Church.

He is survived by his wife, Estilee Foister Clontz; one son and daughter-in-law, Eddy and Linda Clontz of Asheville; three grandchildren, Nathaniel, Rebecca, and Jessica Clontz; four sisters, Florence Denny of Salisbury, Edna Peritts and Lorena Williams of Orlando, FL, and Ethel Mitchell of Asheville; and one brother, Wade Clontz of Salisbury.

Funeral services will be at 2:00 pm Saturday in the Patton Avenue chapel of Groce Funeral Home with Pastor Darryl Searcy officiating. Military rites will be provided by the Buncombe County Veterans Council Memorial Team at Pisgah View Memorial Park.

His family will receive friends from 7 - 8:30 pm Friday at the funeral home and request that memorials be made to Deaverview Baptist Church, PO Box 6112, Asheville, NC 28816.