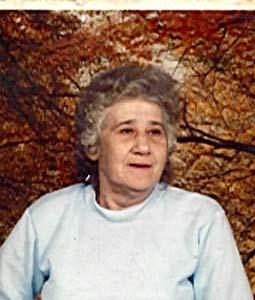 Mary Earleen Carver Reese, 60, of 91 Israel Road, Candler, went to be with Jesus Monday, February 15, 1999, in an Asheville hospital.
Mrs. Reese was born in Haywood County and was a daughter of the late Jessie Homer and Frances Hannah Carver.  She was married to the late Frank Shelton, who died in 1968, and was also preceded in death by a sister, Agnes Gregg and two brothers, J.D. and Jerry Carver.

She is survived by a daughter and son-in-law, Mary Frances and Eddie Noah of Candler;  five sisters, Ollivee Hannah of Candler, Pat Banks of Asheville, Margaret Lindsey of Fletcher, Iva Lee Wilkerson of Landrum, SC, and Gladys Franklin of Waynesville;  two  brothers, Bill Carver of Candler and Robert Carver of Charlotte;  and a number of nieces and nephews.

Funeral services will be at 11:00 am Wednesday in the Patton Avenue chapel of Groce Funeral Home with the Rev. Chuck Waldrup officiating.  Burial will be at Pisgah View Memorial Park.

Her family will receive friends from 7 - 8:30 pm Tuesday at the funeral home and at other times will be at the home.