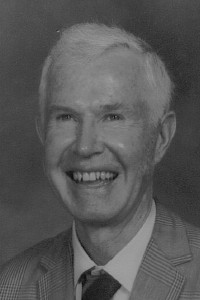 Edmund F. Tyler, 90, of Asheville, departed this life on June 14, 2009, in skilled care at the Western North Carolina Baptist Home. He was the beloved son of Edmund and Mary Jessie Tyler, given life on October 4, 1918. He was predeceased by his parents, only sister, Mary Louise Whitmire, and wife, Jane. Edmund graduated and was an alumnus of Cal Tech. As an aeronautical engineer he worked for Lockheed on the development of lift technology for aircraft wings. He was a member of Trinity Episcopal Church. He had a love of cars, gun collecting, investing and music, and could light up a room with his baby blue eyes. The little things in life are what brought him joy. He will be missed by those who held him close to their hearts. May he rest in peace at Forest Lawn Memorial Park, Glendale, CA. Groce Funeral Home on Patton Avenue is assisting with local arrangements.