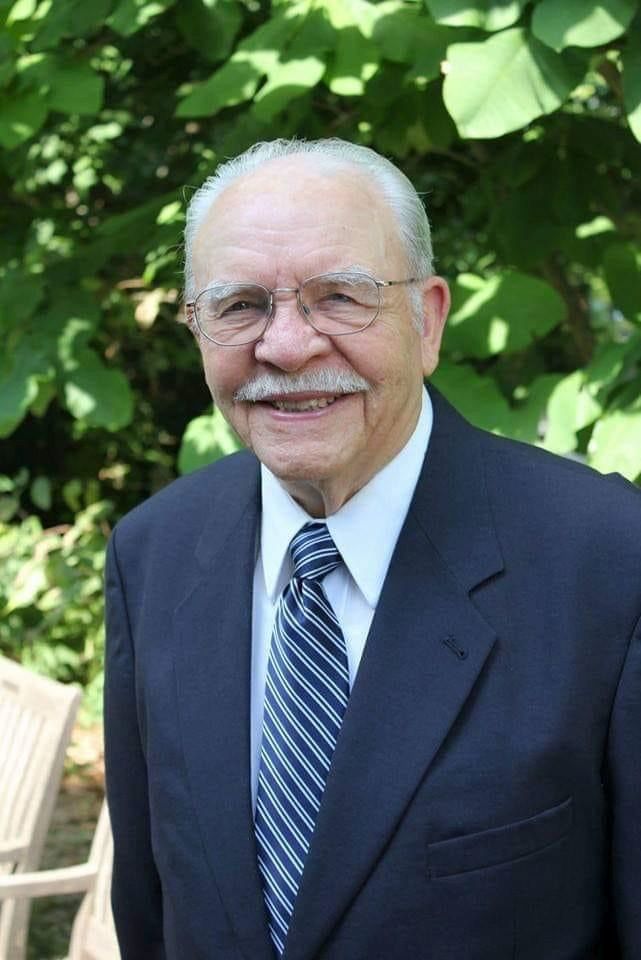 On a beautiful spring morning our father Edward, the son of the late Garnet Roosevelt and Artie Baugus West of Wilkes County, NC, passed into his eternal rest. Known by many and a blessing to all he encountered, Ed West was a remarkable man in every respect.
After serving in the US Army during World War II, Ed returned along with many thousands of the Greatest Generation, to grow America after saving the world. Ed received his associate’s degree from Emmanuel College in Georgia, his bachelor’s degree from Lynchburg College in Virginia, and his master’s degree from Appalachian State. During these years, Ed and the love of his life, Ethel McCann West, moved the family to Elkin, NC and raised four sons. In Elkin, Ed spent many years teaching 7th and 8th grade English at Jonesville Elementary school and serving as scoutmaster of the local Boy Scout troop 625 in Jonesville. Students, parents, and educators alike have remarked on his positive influence as a great teacher. Generations of the family were loyal members of the Jonesville Pentecostal Holiness Church where they had many friends in the worship of Jesus.
Ed’s measured and loving approach to the youth in his care eventually led the family to the Swannanoa Valley in 1967 where he spent 30 years working in various positions at the Juvenile Evaluation Center. He finished his career as the assistant principal of the school, responsible for meeting, greeting and testing of every student. In 1975 the family moved from the Juvenile Center to Montreat Road in Black Mountain where he lived until 2016 after the passing of his wife and partner of 69 years, Ethel.
Ed was faithful and deliberate in his life, his work, and his relationships. He served as the District Governor of the Lions Club and as a member in the Swannanoa Valley Club for nearly 40 years. He also worked closely with the Black Mountain Club where Ethel was a member and officer. He was known regularly as the peanut man, selling salted peanuts at the Owen High School football games. Together, he and Ethel traveled the United States and to other countries for Lions International. Notably, Ed also served as the Treasurer and Board Member of the Marjorie McCune Center for many years where a cottage was named in his honor.
The life of Edward West was about faithful service and care for his fellow man. Ed loved Jesus, his family, his church, his Lions Clubs, and friends. Despite his final three years’ experience of dementia and Alzheimer’s, he always remembered his Christian faith and his devoted membership in the Crossroads Assembly Church in West Asheville.
He was preceded in the Heavenly transition by his wife Ethel McCann West, brothers Russel West, Folger West, and sister Ruth Creel.
He is survived by his sisters Bonnie Minter (late Charles) of Welcome NC, Louise Lane (Keith) of Clovis CA, and his brother Larry West (Wanda) of Elkin NC. Also by his four sons, Gary (Allison) of Cincinnati OH, Greg (Lori) of Tryon, Kevin (Missy), and David (Sharon) both of Asheville; 8 Beloved Grandchildren Leigh Ann Noble (Greg), Ben West (Jen), Amanda Gardner (Bill), Bryan West (April), Stuart West (Jaimi), Hallie Sheaffer (Mark), Erin West (Murphy), Emily West (Jack), and 9 great grandchildren.

The family appreciates your attendance at Visitation at Groce Funeral Services Tunnel Road at 6-8pm on Thursday, May 27, 2021.

Interment will be Friday, May 28, 2021 at 12:00 at the NC Veterans Cemetery in Black Mountain.
The family will join friends back at Crossroads Assembly after the cemetery service.
In lieu of flowers, please consider donating to Edwards’ favorite philanthropy the Marjorie McCune Center, 101 Lions Way, Black Mountain, NC 28711 or see links below:
https://mccunecenter.org/donations/
https://mccunecenter.org/wp-content/uploads/2019/03/MemorialsHonorariums.pdf