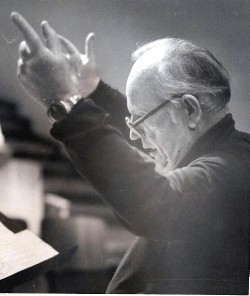 Edwin Easter passed away at Givens Estates in Asheville on July 1, 2015, after 93 years of a life well lived. Ed Easter was the sixth of seven children born to Early Hamilton Easter and Dora Parks Easter. He was born in Lexington, NC on March 3, 1922 and grew up there. He developed interests in music, tennis, travel, reading, politics and history, which he enjoyed throughout his life. He left college at UNC-Chapel Hill to volunteer to serve in the U.S. Army during World War II. During the war, he was trained as a forward artillery spotter, then was chosen to work in the HQ Corps moving from England through France and Germany. He served with distinction from 1942-1945, and was awarded the Bronze Star for Meritorious Service. He frequently entertained the troops with his singing talent and organized plays and variety shows to keep morale high. After the war, he returned to UNC-Chapel Hill, where he earned a dual degree in Music and Radio, Television and Motion Pictures. As a member of the UNC Men's Glee Club and the Carolina Playmakers, Ed studied drama with Paul Green and acted alongside Andy Griffith and other well-known actors. After college, Edwin moved to New York to study drama and singing at the Actors Guild. He was a member of the Gilbert and Sullivan Repertory Company, and in 1950, won a role in the original Broadway touring production of "Oklahoma." Edwin returned to Lexington to sing for a friend's wedding, where he met the organist Ruth Hill. After a long-distance romance, they were married a year later, and returned to New York. Ed and Ruth moved back to North Carolina to raise their family, eventually making Asheville their home for the rest of their lives. In 1959, he became the Director of Music Ministries of Central United Methodist Church, where he worked for the next 25 years. He and Ruth worked and performed together, both in the church and throughout NC and beyond. He formed and directed seven choirs, including children's, youth, adult and handbell choirs, which produced a generation of outstanding musicians. Edwin also was the musical director for Asheville Community Theater, Tanglewood Children's Theater, and UNC-Asheville Theater, directing dozens of shows and helping performers of all ages shine on stage. He staged many musicals at Central UMC as well, involving hundreds of church members. He taught private voice lessons to many in the community, including Teena Windham, Miss North Carolina 1964, and Bellamy Young, now an award-winning Broadway and TV actress. Edwin Easter's tenor voice was well-known. He began singing solos as a child. His singing was so inspiring and thrilling that he was asked to perform in concerts and at churches throughout the country, and for a United States President. However, more than his music, it is his enthusiasm for life, his joyful smile, his constant humor, his sense of adventure, his deep and abiding faith, his compassion and quiet generosity toward those in need, his friendship with people of all races and economic levels, his encouragement of and investment in others, and his great love for his family and friends that will be most missed. He invested his time, talent, and love in building up others and bringing out the best in them. Edwin was a member of Central UMC for 56 years. He was predeceased by his parents and his five brothers and one sister. He is survived by his wife of 63 years, Ruth Hill Easter, his son, Edwin Harold (Hal) Easter Jr. and wife Sharon of Fort Worth, Texas; his daughter, Rev. Karen Easter Bayne and husband Nick of Charlotte, NC; four grandchildren, Nicole Walling (Blaine) of Sherman, TX, Michelle Easter of Fort Worth, TX, Anna Sink (Matt) of NYC, and Graham DeLoach of Asheville; great-granddaughter Kennedy Walling; his sister-in-law Virginia Easter of Lexington; and many nieces and nephews. A memorial service will be held at Central United Methodist Church in Asheville on Sunday, July 12, at 3:00, with Rev. Dr. Robert Blackburn and Rev. Ed Hillman officiating. Visitation will follow in the Fellowship Hall. Special thanks to the staff of Givens Estates for their excellent care and kindness. In lieu of flowers, please send memorial gifts to the Residents Fund of Givens Estates, 100 Wesley Dr., Asheville, NC 28803, or to the Music Fund of Central United Methodist Church, 27 Church Street, Asheville, NC 28801. All can best honor Edwin Easter Sr. by adding joy to the world and encouraging others. He will be deeply missed and loved forever. Groce Funeral Home on Patton Ave. is assisting the family.