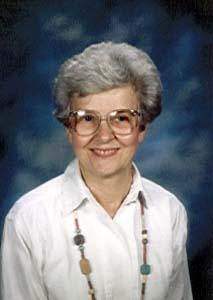 Eleanor F. Wykle, 62, of 18 Wykle Road,  Asheville, died Friday, January 8, 1999, at her residence.
Born November 11, 1936, in Bismark, WV, she was the daughter of Rachel Cosner Rippey of  Keyser, WV, and the late Walter Carl Rippey.  She graduated from Berea College, KY, with a  bachelor’s degree in education.  An educational visionary, she adopted her students for life, following and supporting many of them through and beyond college.
Mrs. Wykle taught school in Florida, Ohio, and Asheville, and retired from the Asheville City Schools in 1996.  She was a member of several professional organizations, including NEA and NCAE.  She served on several education committees and was active in politics.
She was a member of First Baptist Church of  Asheville, where she taught children’s Sunday school.
In addition to her mother, she is survived by her husband, Charles Wykle;  three daughters, Alesia Mullis and her husband Alan of Louisville, KY;  Lucinda Wykle-Rosenberg and her husband Eric of Boston, and Nancy Wykle of Durham; a grandson, Andrew Mullis;  brothers and sisters-in-law Ralph Joan of Delran, NJ, Robert and Mari of Vienna, VA, and Wayne and Jane of Keyser; a sister Linda Yokum and her husband Harlen of Morgantown, WV; a sister-in-law Iris Jean Rippey; and was preceded in death by a brother, Gene Rippey.  She is also survived by her uncle, Greeley Rippey and his wife Frances of Colorado;  an aunt Annie Rippey of Kent Store, WV;  and adopted family Carlton Collins and his wife Celeste and grandchildren Kathleen and Garrett.
Funeral services will be at 2:00 pm Tuesday at First Baptist Church with the Rev Dr. Ron Crawford and the Rev. Gail Coulter officiating.  Burial will be in Lewis Memorial Park.
Pallbearers will be members of Charles Wykle’s Sunday school class.
Her family will receive friends from 7 - 9 pm Monday at First Baptist Church of Asheville.
In lieu of flowers, her family requests that donations be made to the Eleanor and Charles Wykle Scholarship Fund, c/o Asheville City Schools Foundation, Asheville City Schools, PO Box 7347, Asheville, NC 28802;  or to the Sloan-Kettering Cancer Research Institute, or to
any other charity of choice.
Groce Funeral Home is in charge of the arrangements.