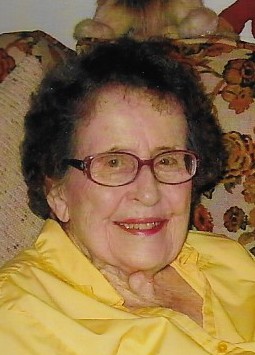 Eleanor Sale Fluharty died peacefully at Givens Estates' Wood Assisted Living on December 10, 2017, four weeks after her 101st birthday. Eleanor was born in Asheville to Myrtle Westall Sale and Frederick Leland Sale and grew up in Lakeview Park. She attended Biltmore College (the predecessor to UNCA), and graduated from the University of South Carolina in Columbia, South Carolina. She returned to Asheville and held administrative positions in several offices. In 1941, she married Joseph Randolph Fluharty and settled in Canton, North Carolina before her husband joined the army during World War II. She traveled with him to his US stations before he was transferred overseas, working in offices and at one time joining the team that was working on the new B-29 plane, a project in which she took pride and one that gave her a lifelong interest in airplanes and space travel. Upon Joe's return after the war, they settled at first in Canton and then built a house in Malvern Hills that was to be their home for the next 62 years. During that time, she was a devoted wife and mother, putting her family above all else. Eleanor and Joe enjoyed a happy marriage of 72 years. When Joe died in 2013, Eleanor moved to Givens Estates' Wood Assisted Living, where she received love and care for the next four years. In addition to her husband, Eleanor is predeceased by three brothers, Leland Sale, Frederick Sale and Richard Sale as well as her parents. She is survived by a daughter, Ellen Fluharty Howe (Ev); a son, Joseph Randolph Fluharty, Jr. (Beth); seven grandchildren, Jeffrey Hall (Jocelyn), Eleanor Fluharty, Tricia Coghlan (Jeremy), Tom Fluharty, Julie Paulsen (Craig), Katherine Howe, and David Howe; and five great grandchildren, Parker Coghlan, Judah Hall, Hadley Coghlan, Drew Paulsen, and Alex Paulsen. A memorial service will be held on Saturday, December 16, 2017 at 2:00 PM in the Pulliam Chapel at Givens Estates. In lieu of flowers, memorials may be made to St. Judes Children's Hospital. Groce Funeral Home on Patton Ave. is assisting the family.