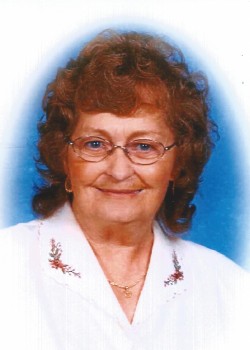 Ellene Chambers Metcalf, 78, of Candler, died on Tuesday, November 20, 2012, at her home surrounded by her family. Mrs. Metcalf was born in Haywood Co., and was a daughter of Mabel Gaines Murray Chambers and of the late Elton Augustas Chambers. She was also preceded in death by her husband, William Carroll "Bill" Metcalf, who died in 2005, and a sister. In addition to her mother, Mrs. Metcalf is survived by two daughters, Debbie Miller of Candler, and Carolyn Jaynes and husband Joe, of Haywood Co.; son Randy Metcalf, Sr., of Burlington; nine grandchildren; seven great-grandchildren; and three sisters. Her family will receive friends from 1:00 to 2:00 p.m. Saturday in the Patton Ave. chapel of Groce Funeral Home. Funeral services will follow at 2:00 p.m., with Charlie Sams officiating. Interment will follow at Forest Lawn Memorial Park. Memorials may be made to Starnes Cove Baptist Church, 149 Starnes Cove Rd., Asheville, NC 28806.