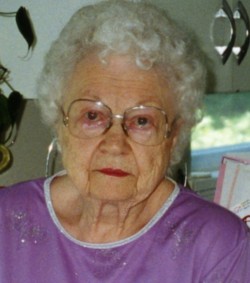 Elva Jervis Smith, 99, of Asheville, passed away October 1, 2009, following several years of declining health. Born in Buncombe County on July 15, 1910, she was a daughter of the late Alpha Tillery and the Rev. Charles E. Jervis, who was pastor of Newfound Baptist Church in Leicester from 1902-1915. The youngest of eleven children, she was also preceded in death by all of her sisters and brothers, Ethel J. Penley, C. Fred Jervis, Hattie J. Hayes, Hildreth J. Tucker, Thelma J. Frederick, Marion J. Wilson, Curtis M. Jervis, Ellen J. Lowder and two infants who died in childbirth. Mrs. Smith was married for 61 years to Riley W. Smith, who died in 1994. Peggy Louise Smith, the elder of their daughters, died in 1948 at the age of 11. Elva is survived by her younger daughter, Kay S. Sharpe and husband Alan D. Sharpe of Asheville; three nieces Corynne Penley Lusk of Leicester, Billie Wilson Best of Ringgold, GA, and Jerry Anne Jervis Allred of Etowah; two nephews, Charles R. Jervis of Bartow, FL and George H. Wilson of Decatur, AL. She was preceded in death by her niece Thelma J. Pittman of Hendersonville and her nephew, Donavan J. Penley of Tampa, FL. She was a member of West Asheville Baptist Church for 63 years where she served in the nursery for a number of years and was associate treasurer for a short time. A graveside service will be held at Green Hills Cemetery on Saturday at 2:00 pm with the Revs. Dr. James H. Johnson and Stan Welch officiating. In lieu of flowers, it is requested that memorials be made to the West Asheville Baptist Church Building Fund, 926 Haywood Road, Asheville, NC 28806 or to the Newfound Baptist Cemetery Fund, c/o Marie Roberts, 1147 Old Leicester Highway, Asheville, NC 28806. The family would like to express their deepest gratitude to Sue Surrett, Barbara Evans, Juanita Briggs, Pat Burcham, Frances Brinkley, Geri Holcombe and the Friendship Sunday School Class of West Asheville Baptist Church for the love and attention given to Elva in the latter days of her life.