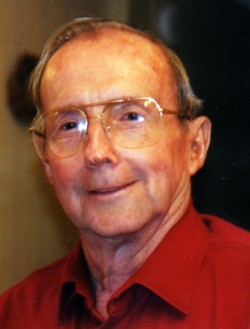 George Elwood Hall, 80, of 47 Sunset Drive, Asheville, died on Wednesday, May 20, 2009, at his residence. A native of Buncombe Co., Mr. Hall was a son of the late Joseph Fred and Opha Plemmons Hall. He was preceded in death on November 13, 2000, by his wife Juanita "Jo" Hollar Hall, whom he married April 3, 1953, and by his brothers, Belvin, J.C., Levi, and Bryce Hall. Mr. Hall had worked as used car assistant manager at Parkland Chevrolet and also worked for a number of years at George Buckner's Marine Sales. He was a U.S. Army veteran of the Korean War, serving with the 448th Construction Engineers, and was an active member of Emmanuel Lutheran Church, where he served as treasurer, was a former trustee, and a member of the Board of Elders. He also volunteered at ABCCM. Mr. Hall is survived by his daughters, Sharon Roberson (Steve) and Karen Hall; sister-in-law, Rhonda Hall; grandchildren, Crystal Ball (Daniel), Chad Roberson (Stephanie), Brian Davis, and Candice Quinley; great-grandchildren, Cameron Quinley and Brayden Roberson, and a special friend, Lura Mae West. A funeral service for Mr. Hall will be at 11:00 a.m. Saturday at Emmanuel Lutheran Church with the Revs. Hank Hollar and Dr. Michael McFarland officiating. Interment will follow at Green Hills Cemetery. Pallbearers will be Steve Roberson, Chad Roberson, Brian Davis, Larry Davis, Daniel Ball, and Belvin Hall; honorary pallbearers will be Jerry Plemmons, Joe Plemmons and Don Baker. His family will receive friends from 7:00 to 9:00 p.m. Friday at Groce Funeral Home on Patton Avenue. Memorials may be made to Emmanuel Lutheran Church, 51 Wilburn Place, Asheville, NC 28806.