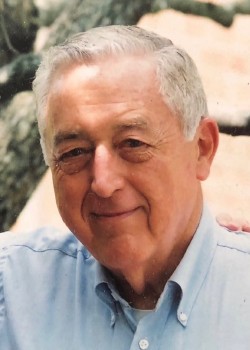 Eric Andrew Jonas, Sr, 86 and a lifelong resident of Charlotte, NC, died peacefully after a brief illness on June 17, 2021 at the NC State Veterans Home in Black Mountain, NC. The son of Donald R. Jonas and Annie W. Jonas of Lincolnton and Charlotte, Eric was born December 27, 1934 in Lincolnton, NC.

Eric graduated from Central High School in Charlotte where he played varsity basketball and golf. He competed in state and national golf tournaments including winning the NC CGA Junior Golf Championship in 1952 at age 17, and advancing to the fourth round of match play in the U.S. National Junior Amateur Golf Tournament. He made lifelong friends at Central High and was an active member of the Central High reunion monthly gatherings into his 80s.

Eric graduated from UNC-Chapel Hill in 1956 majoring in English, was a member of Sigma Chi fraternity, active with the ROTC and graduated Phi Beta Kappa. He was a lifelong Tar Heel basketball and football fan.

Following graduation from UNC, Eric served three years as a first lieutenant in the United States Air Force with posts first in Texas and then in California as a navigator on the 437th Fighter Interceptor Squadron. He was accepted to Harvard Law School and moved to Boston in 1959 where he met his wife of 59 years, Darlene Evans Jonas, who was attending graduate school at Boston University. Eric liked to say the chance meeting of Darlene at a Thanksgiving meal gathering was one of the happiest days of his life. He would also quickly add that it added to his joy that day when Carolina beat Duke 50-0 on national TV!

Eric and Darlene’s wedding on May 26, 1962 at Trinity Church in Boston followed his final exam at Harvard Law the previous day. The couple moved to Charlotte and started their family. Eric worked as an attorney with the Dotson Palmer law firm for several years before joining Weinstein Sturges as a partner where he practiced real property law and family estate work for over 20 years, and then in private practice until retiring in 2011. Eric was a 50 year member of the North Carolina Bar.

Eric was a life time member of the Central YMCA (now the Dowd Y) since his childhood and an active member there into his 80s. He made almost daily visits to the Dowd Y for nearly 50 years. Eric served on the Y board and as Board chair of the Dowd Y in addition to coaching his kids’ basketball teams.

Eric was a 40 year member of the Charlotte North Rotary Club, serving in several leadership roles including Rotary president. Eric was also a lifetime blood donor to the Red Cross.

When golf took too much time away from the family, Eric took up tennis. As an adult he played competitively at Barclay Downs and Olde Providence and played in the 1999 Senior Games NC Tennis Championships.

He loved being a father to his four children, taking care of his tomato plants along with body surfing at Ocean Isle Beach every summer with his family. His favorite trips with friends and family included attending the Masters Golf tournament, Wimbledon, US Open Tennis and the French Open.

Eric was a member at Myers Park United Methodist Church in his youth, at Mouzon United Methodist when he first returned to Charlotte and for many years active as an elder at Covenant Presbyterian with his family.

He loved being a native North Carolinian, embodying the state’s motto, Esse Quam Videri, “to be rather than to seem.”

Eric never met a stranger and was always quick with a smile of acceptance followed by a series of his favorite jokes and puns. Eric ordered a personalized license plate (4WAYTEST) to share his appreciation of Rotary’s Four-Way Test of the things to think, say or do:
● Is it the TRUTH?
● Is it FAIR to all concerned?
● Will it build GOODWILL and BETTER FRIENDSHIPS?
● Will it be BENEFICIAL to all concerned?

Eric followed these tenants in his own life, leading to close, lifelong friendships and friendly daily encounters. Eric (Dad, Pops, Papa Bear, P-bear) was deeply loved and cherished by his family.

A celebration of Eric’s life will be held at Covenant Presbyterian Church in Charlotte, NC on July 10th at 11:00 a.m.

In lieu of flowers, donations to The Dowd Y or the Greater Carolinas Region of the American Red Cross are warmly appreciated.

Friends and family are encouraged to add their thoughts and remembrances of Eric online with the Groce Funeral Home at www.grocefuneralhome.com.

For questions about the memorial service please email jim.jonas@gmail.com.