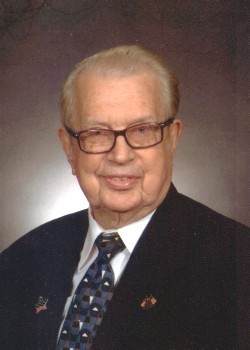 Everett "Frank" Scroggs, age 100, of Candler, died Thursday, June 25, 2015, at the John F. Keever Solace Center. Mr. Scroggs was born in Clay County, NC on October 4, 1914 to the late Harley and Pearl Hampton Scroggs. He lived most of his life in Buncombe County. Frank served in the Army for 37 months in WWII in Iceland, England, and Ireland, seeing combat in France and Germany. He was with the 5th Division, 11th Infantry, Company K. He was wounded on September 9th, 1944 in Dornat, France attempting a crossing of the Moselle River. He received the Purple Heart, Bronze star, Combat infantry badge, and the European Theatre operations medal and bar with three bronze stars. Frank was married to the late Annie Reece Scroggs for 59 years and they loved to travel. He retired from Southern Railway after 39 years. He was a lifelong member of West Asheville Baptist Church where he was an usher for 25 years and treasurer of his Sunday school class for many years. He enjoyed following his favorite baseball teams, the Atlanta Braves and St. Louis Cardinals, and was a fabulous handyman. Mr. Scroggs is survived by his sister, Grace Beale; great nieces Cindy Jones Corley and husband Rob Corley, Sandie Jones, and Leigh Jones; very special friends Gerri and Gerald Hill, Lea Wofford, and Biv Hughes; plus a number of other nieces and nephews, great, great-great, and great-great-great nieces and nephews. Funeral services will be held at 3:00 p.m. on Sunday in the Patton Ave. chapel of Groce Funeral Home, with the Rev. Dr. Stan Welch officiating. The family will receive friends one hour prior to the service. Private burial will be held at Forest Lawn Memorial Park. In lieu of flowers, memorials may be made to West Asheville Baptist Church Building Fund, 926 Haywood Rd., Asheville, NC 28806, or to CarePartners Hospice, PO Box 25338, Asheville, NC 28813.