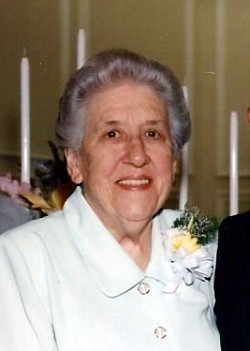 Faye Jones Ferguson, 88, of the Sandy Mush Community, Buncombe Co., went to be with her Lord and Savior on October 25, 2014, while in the care of her family. She was the daughter of the late Horace and Lavada Jones. In addition to her parents, she was also preceded in death by her husband, Frank Ferguson, and siblings, Lattie Jones, Candler Jones, Connie McGonagle, and sister-in-law, Ruth Burson. She was a faithful and active member of Jones Valley Baptist Church until her illness, serving as Clerk and Secretary. Aunt Faye is survived by several nieces and nephews, who loved her very much and now have a void in their life, but hope to meet her again on that Golden Shore. A funeral service for Aunt Faye will be at 11:00 a.m. on Wednesday, October 29, 2014, at Jones Valley Baptist Church, with the Revs. Tom Dorsey and Garry Rogers officiating. Interment will follow in Jones Valley Baptist Cemetery. Her family will receive friends from 7:00 to 8:30 p.m. on Tuesday at Groce Funeral Home, Patton Ave. Her family would like to express their thanks to Hospice Home Care Staff, Berta, Victoria, and Bessie and other CarePartner Home Care Staff who have assisted with her care for the last year. In lieu of flowers, memorials may be made to CarePartners Hospice, PO Box 25338, Asheville, NC 28813.