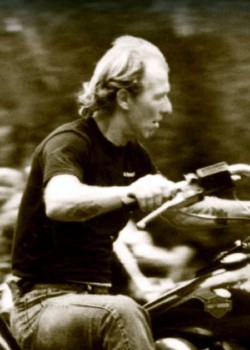 Frank Leslie Miller 70, of Candler, went to be with the Lord on March 17, 2016. He had a passion for Harley Davidsons and for his brothers he rode with. He was an avid deer hunter, and his greatest passion was his family. His parents Franklin and Vivian Miller preceded him in death. He is survived by his wife of 33 years, Bari Miller; two sisters, Wanda Baird (Ray) of Candler, NC and Marie Rice of Candler, NC; sons, Kevin Rogers (Shannon) and Marvin Miller (Tonya); daughters, Rebecca Stewart (Michael) and Ali Miller; two additional girls who were precious to him, Vickie Mask and Ashley Barrier Rivers; six granddaughters; and five grandsons. He was the heart of WNC Independent Brotherhood for 36 years. The family will receive friends from 1:00 to 3:00 p.m. Monday at Groce Funeral Home on Patton Avenue. A graveside service will follow at 3:00 p.m. at Forest Lawn Memorial Park. The family would like to say a special thanks to Brad Allen for contributions. In lieu of flowers, please make memorial donations to Groce Funeral Home.