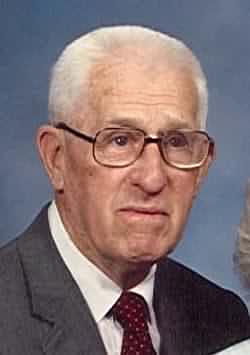 Mr. Howell was born in Haywood County and raised in Shoal Creek Jackson County. He was the son of the late Belle and Jerry Howell and was the second oldest of six brothers and five sisters. In his youth he worked as a car mechanic and helper to his carpenter father. Like many of that time he was largely self educated, having studied the machinist’s art, ferrous metalurgy, and industrial management.

In 1931 he went to work for American Enka where he stayed for 41 years, and ran their engineering development shop. He was a long time active member of Montmorenci United Methodist Church in Candler.

Funeral services will be 11:00 am Wednesday at Montmorenci United Methodist Church with the Revs. Terry Duckworth and Christina Condit officiating. Burial will be in the church cemetery.

His family will receive friends at a luncheon in the church fellowship hall immediately following the service.

Memorials may be made to the Montmorenci United Methodist Church, PO Box 610, Candler, NC 28715.