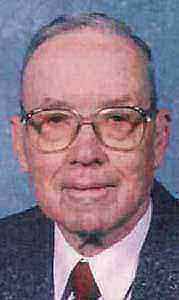 G. Wilson Thompson, 86, of Asheville, died Friday, June 4, 2004. Mr. Thompson was born in Tuscumbia, Alabama, and was a son of the late William I. and Clara Inman Thompson. He was also preceded in death by a brother, Lee Thompson. Mr. Thompson was an Army officer during WW II and served in five campaigns in the European Theater, including the D-Day landing on Omaha (Easy Red) Beach at Normandy, France, and the Battle of the Bulge. On his way to the June 6, 1943, Normandy Landing he was on the ship “Dorothea L. Dix” that sailed from Weymouth, England, and formed an acquaintance with the author Ernest Hemingway who was on board serving as a military observer. He was awarded the Silver Star, the Bronze Star, and the Purple Heart. He worked with the Department of Defense in the Asheville office of the Air Weather Service until retiring in 1972. He then served as the WNC District Representative for Aid Association for Lutherans. He was a long time member of Emmanuel Lutheran Church. Surviving are his wife, Lucille Gilden Thompson; a daughter, Pamela Stein and her husband Dr. George Stein of Montgomery, AL; a son Randall Wilson Thompson of Boulder, CO; two granddaughters, Rachel and Charlotte Stein; two sisters Hazel Harwell of Asheville and Frances Magruder of Augusta, GA; and a number of nieces and nephews. Funeral services will be 1:00 p.m. Monday at Emmanuel Lutheran Church with the Rev. Mark Neiting officiating. Military honors will be provided by the Buncombe County Veterans Council Memorial Team at Lewis Memorial Park. His family will receive friends from 7:00 to 8:30 p.m. Sunday at Groce Funeral Home on Patton Avenue. Memorials may be made to Emmanuel Lutheran Church Building Fund, 51 Wilburn Place, Asheville, NC 28806.