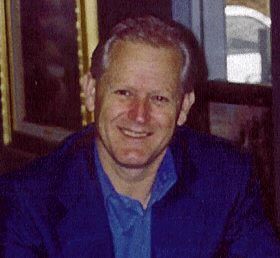 Asheville ~ Gene Russell Rock died at the age of 51 on September 14, 2000 of pancreatic cancer.

He was born in Attleboro, MA. Gene is a graduate of Attleboro High School and National University in Sacramento, CA. He served 20 years in the US Air Force and retired in 1989.

In 1993, Gene and his wife pioneered the Thomas Kinkade Signature Galleries by opening the first Kinkade gallery in Kennebunkport, ME. In 1996 Gene expanded their galleries to include Asheville, NC and Highlands, NC. In 1999, they moved permanently to Asheville, NC to make their home there.

He is survived by his wife of 28 years, Deborah Gariepy Rock and their two sons, Wayne, who is attending AB Tech in Asheville, NC, and Kevin, who attends Virginia Tech in Blacksburg, VA. Also his mother-in-law, Barbara Gariepy, his parents, Arthur and Doris Rock, and his brothers and sisters, Sandra Quaglia, Carolyn Andrews, Ronald Rock, Kenneth Rock, and Deborah Nadow.

A memorial service will be held at the Cathedral of All Souls in Biltmore Village, Asheville, NC on Saturday, September 23rd at 12 noon.

In lieu of flowers, please make a donation in Gene’s memory to the Lustgarten Foundation for Pancreatic Cancer Research at 1111 Stewart Avenue, Bethpage, NY 11714.