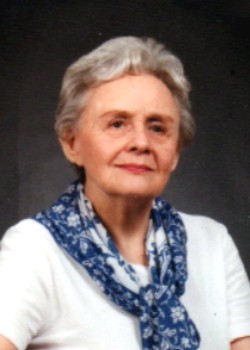 Genevieve Elaine Muirhead Sullivan, 87, of Hendersonville, died Tuesday, November 15, 2011, at Sunnybrook Assisted Living Center. Gem was born August 28, 1924, in Atlanta, Georgia and attended Girls' High. She married John H. Sullivan during World War II and they were stationed in Long Island, New York. They returned to Atlanta when the war ended. In 1950 they moved to Asheville and raised their family here. Gem was very active in the Asheville art community. She was a member of several painting groups, had numerous shows in the area and wrote the Art in Asheville column in the Asheville Citizen Times for several years. She and her husband, Jack, were active members of First Presbyterian Church for many years before joining Grace Episcopal Church in the 1980's. In the last several years of her life she resided in Hendersonville at Sunnybrook Assisted Living. The love and care given by the staff there rejuvenated her joy of life. The family holds dear many memories of a beautiful and gracious lady who loved her family, kept a sparkle in her eye often indicating a keen wit and sharp intelligence. Genevieve was preceded in death by her husband, her sister Sarah, and brother Leighton. She is survived by her sons Jack Sullivan (Dorothy) of Atlanta and Tom Sullivan of Asheville; grandsons Shea Sullivan (Lynn) and David Sullivan (Eleanor) and great-grandchildren Annie, Sam, Sarah, Jake and Walton, all of Atlanta. Services will be at 10:00 AM on Saturday, November 19, 2011 at Grace Episcopal Church with Father Robert Reece officiating. Interment will follow at Lewis Memorial Gardens. Memorials may be made to Children's Healthcare of Atlanta, 1687 Tullie Circle, Atlanta, GA 30329 or www.CHOA.org.