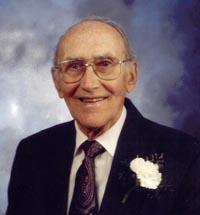 A US Army veteran of World War II, Mr. Keiser was a retired engineer from Taylor Instruments following 44 years of service. He was also a lifelong member of the Masonic lodge.

Mr. Keiser enjoyed golfing and fishing and spent many wonderful winters in Ft. Pierce, FL. He was a devoted husband and father.

Survivors include two daughters, Jan Coin of Fletcher and Cheryl Lynn Strafford and her husband, Pete of Morristown, TN; a daughter-in-law, Marsha Flagg of Asheville; ten grandchildren and sixteen great-grandchildren.

A funeral service will be conducted Thursday evening at 6:00 PM in the chapel of Groce Funeral Home at Lake Julian on Long Shoals Road with Rev. Arnie Corriher officiating. The family will receive friends Thursday evening from 5:00 - 6:00 PM at the funeral home. Burial will be at 10:00 AM Friday in Calvary Episcopal Churchyard.

Memorials may be made to Skyland United Methodist Church, 1984 Hendersonville Road, Skyland, NC 28776 or the charity of one's choice.