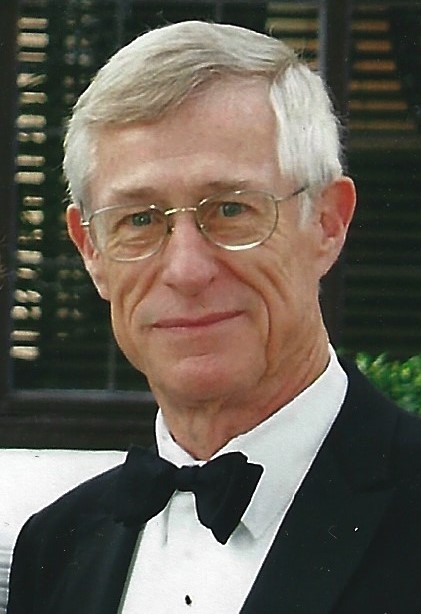 A great man has left our world… George Elbert Ivey died March 3 at the age of 85, surrounded by those he loved and those that loved him. Throughout his full life and especially during his days with Alzheimer’s, he was cared for and supported by his loving wife, Betsy.

George was born February 10th, 1937 in Hickory, NC. He spent his formative years in Hickory and Sarasota, FL, graduated from The Asheville School and then Duke University. This created a lifelong love of Duke basketball (despite marrying a Tarheel). He spent four years in the Navy and the stories of his travels, friendships, and adventures were told time and time again.

After living in Charlotte, NC for a number of years, George ultimately returned to Asheville, NC with Betsy where they built their life and raised their two daughters, Parker and Katherine. George made his mark on Asheville in the best way possible. He never met a stranger, was a friend to all and kind to all. In addition to his family, George chose to care for people from all walks of life. He taught compassion, the desire to give and help, and treat everyone with respect. He was actively engaged in the community, his children’s school, his church, and his neighborhood.

George had an impressive career that started and ended in the financial industry. He spent time as a banker, business broker, small business owner (Quick as a Wink Car Wash), and financial advisor, but his true passion was farming. In addition to his “day” job, he owned Ivey Farms where he ran a pick-your-own strawberry farm, grew tobacco, corn, and cared for a mule, Terrible Tom, a horse, Terrific Tony, and his rescue horse, Bones.

George was a great dad (second dad to many), a loving husband, son, brother, grandfather, and mentor to countless friends. He will be so missed. Those of us left will continue to honor his legacy and try to follow his example.

George is preceded in death by his mother, Isabelle, his father, Elbert, his step-father, Mac, and his brothers, David and Jerry.

George is survived by his wife, Betsy Ivey, his daughters and their spouses, Parker and Alex Crawford, Katherine Ivey and Jonathan Nameth, his brother, Kenny McCandless (Jeanie), his sister-in-law, Thorunn Ivey, his adored grandchildren, Will, Sophie, Harris, Miller, and Cooper, the Trout Lynn Clan, nieces and nephews as well as lots of loving family and friends.

If you would like to make a tribute to George, please consider one of the following: MemoryCare Inc at 100 Far Horizons Lane, Asheville, NC 28803; MountainCare Services at PO Box 5956, Asheville, NC 28813; or Four Seasons Hospice Foundation at 211 N. Main St, Hendersonville, NC 28792.

The celebration honoring his life will be held Saturday, March 19, 2022 at 2:00pm at Central United Methodist Church.