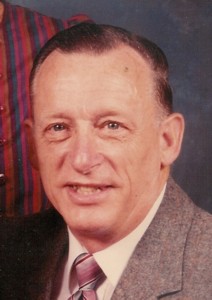 GEORGE RAYMOND CHAMBERS George Raymond Chambers, 83, of 69 Brucement Circle, Asheville, entered into rest peacefully with his Lord on Thursday, May 1, 2008, at Mission Hospitals. A native of Marion, Ohio, he was a son of the late Fred Noel and Rosa Mae Johnston Chambers. He was also preceded in death by his wife, Marilyn Taylor Chambers, who died in 2007; a sister, Dorothy Chambers; three brothers, Dale, Dwight and Harold Chambers. A US Army veteran of WWII, Mr. Chambers was retired from IBM where he had worked in research and development. He was a member of the First Church of the Nazarene in Asheville. Mr. Chambers is survived by his daughter, Sue Chambers of Asheville. A memorial service will be held on Saturday, May 24 at 2:00 pm at First Church of the Nazarene with the Reverend James Stewart officiating. The family will receive friends following the service. Groce Funeral Home on Patton Avenue is assisting with arrangements.