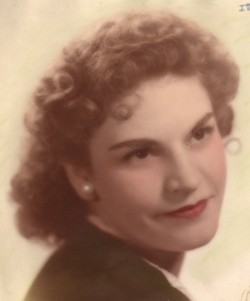 Geraldine Creasman Holcombe, 83, of 95 Holcombe Cove Rd, went to be with the Lord on Thursday, September 30, 2010, at Pisgah Manor Health Care Center. A native of Buncombe Co., Mrs. Holcombe was a daughter of the late James Creasman and Pearl Landers Creasman McCracken. She was also preceded in death by her husband, Isaac "Dick" Holcombe, who died in 1992, and a daughter, Sharon Lee, who died in 1957. Mrs. Holcombe is survived by daughter, Wanda King and husband Sam, of Candler; son, Richard Holcombe and wife Stephany, of Acworth, GA; granddaughter, Kimberly Dawn King, of Candler; and brothers Wally Creasman and Tommy McCracken, of Asheville. A funeral service for Mrs. Holcombe will be at 4:00 p.m. Sunday in the Patton Ave. chapel of Groce Funeral Home with the Rev. Sam Fine officiating. Interment will follow at Gashes Creek Baptist Church Cemetery. Her family will receive friends from 6:00-7:30 p.m. Saturday at the funeral home. At other times the family will be at the home of Wanda King, 83 Melton Rd., Candler.