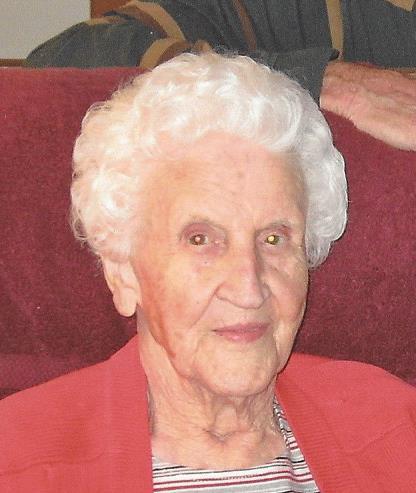 Grace Haag Allen, of Fletcher, died Monday, January 4, 2016 at Park Ridge Hospital. Born in Jefferson County, TN on July 1, 1915, she was a daughter of the late Robert and Clara Knight Haag. Grace was also preceded in death by her husband, Carlton "Carl" Allen who died in 1992; two sisters, Zelma Fisher and Daisy Oakley as well as two brothers, John Henry Haag and Jim Haag. Grace retired from Kearfott Guidance and Navigation Company, was a member of Biltmore Baptist Church and lived most of her life in Buncombe County. She is survived by her daughter of whom she lived with the past eleven years, Doris Cook of Fletcher; one son, Gene Allen and his wife, Susan, of Enka as well as a very special grandson, Thomas "Tommy" Allen, who is currently enrolled at the University of Illinois. A graveside service will be held at 11:00 AM on Thursday, January 7, 2016 at Forest Lawn Memorial Park in Candler with Pastor Cody Sturgill officiating. In lieu of flowers, the family asks that you consider making a memorial contribution in Grace's memory to Boiling Springs Baptist Church, PO Box 1177, Fletcher, NC 28732. A loving thank you, Mother, for the thoughtful things you've done. Without expecting special words of praise from anyone, for making home a happier place than words can ever tell, for understanding problems and for solving them as well, for being patient all those times when you were tired too- but mostly, thank you, Mother, for simply being you. Groce Funeral Home at Lake Julian is assisting the family.