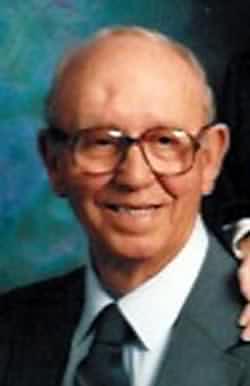 Hall James Hensley, 82, of 434 London Road, Asheville, died Saturday, October 26, 2002, in an Asheville hospital. Mr. Hensley was born in Yancey County and was a son of the late Garfield Washington and Myrtle Duncan Hensley; He was an Army veteran of WW II and a recipient of a Purple Heart and Bronze Star. He was retired from DuPont and was a member of Sweeten Creek Freewill Baptist Church. He is survived by his wife, Elsie Marcum Hensley; two sons, Jerry Hensley of Lake Lure and Bobby Hensley of Myrtle Beach; two brothers, Waymon Hensley of Hendersonville and Paul Hensley of Fletcher; seven grandchildren and nine great-grandchildren. Funeral services will be at 11:00 am Tuesday in the Patton Avenue chapel of Groce Funeral Home with the Rev. Tom Pierce officiating. Military honors will be provided by the Buncombe County Veterans Council Memorial Team at Woodlawn Cemetery. His family will receive friends one hour prior to the service at the funeral home.