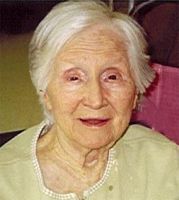 Fairview ~ Hannah Lee Farmer, 95, formerly of Holly Acres Drive, died Sunday, May 11, 2003 at Flesher's Fairview Health Care Center. A native of Jackson County, Miss Farmer was a daughter of the late James Bedford and Nora Jeanette Hipps Farmer. She attended Western Carolina Teachers College at Cullowhee, NC until the beginning of World War II. She then enlisted in the Army Air Corps, trained in the States and was sent to the Philippines. Upon her return home from the war, she attended King College in Bristol, TN. She worked in Washington, DC then later returned to Asheville to work at Enka and CTS. Survivors include two brothers, Vincent Farmer of Maryville, TN and Zeb Farmer of Asheville; a half-sister, Annie Ruthe Farmer of Statesville; three half-brothers, Burt Farmer, Pat Farmer and Joe Farmer, all of Jackson County; numerous nieces and nephews, great nieces and great nephews. A memorial service will be conducted Wednesday at 7:00 PM in the chapel of Groce Funeral Home at Lake Julian on Long Shoals Road with Rev. William E. Nelson officiating. The family will receive friends following the service at the funeral home. In lieu of flowers, memorials may be made to Flesher's of Fairview Employee Trust Fund, PO Box 1160, Fairview, NC 28730 in honor of the care given to Miss Farmer.