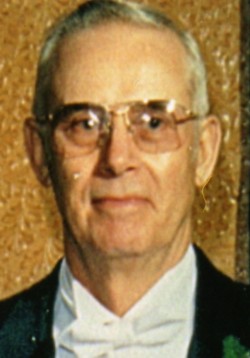 HARLEY J. ROGERS Harley J. Rogers, 83, formerly of 899 Old Highway #20, Alexander, died Tuesday, March 25, 2008. Mr. Rogers was born in Buncombe County and was a son of the late Melvin P. and Julia Hawkins Rogers. He was married to Oneva Robinson Rogers, who died in 2004. Mr. Rogers was an Army Ranger during WW II, serving with Company 1, 291st Infantry in Normandy, Northern France, Ardennes, Rhineland and Central Europe. He received the Bronze Star for his duty at the Battle of the Bulge. He retired in 1986 after 30 years with American Enka. He attended Mountain View Baptist Church. He is survived by three daughters, Vicki Carney, Theresa Amen, and Pam Robinson, five grandchildren, Patrick, Ryan, Matthew, Shannon and Tyler, and his caretaker for many years, Margaret Griffin. The funeral will be at 10:00 a.m. Friday in the Patton Avenue chapel of Groce Funeral Home with the Rev. Everett Haney officiating. Burial with military honors provided by the Buncombe County Veterans Council will follow at Ashelawn Gardens. The family will receive friends from 6:30 to 7:30 p.m. Thursday at the funeral home. Flowers will be accepted or memorials may be made to the VFW Post 891, 626 New Leicester Highway, Asheville, NC 28806.