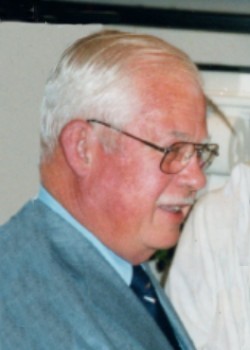 Harvey Clyde Nix, Jr., 71, of Bat Cave, died unexpectedly in his home on Saturday, July 09, 2011. H. C. was born in a pre- Civil War dwelling on Bearwallow Road in Henderson County, NC. He was the son of the late Harvey Clyde and Louise Stroupe Nix. He was a graduate of Lee Edwards High School (Asheville High) in 1956. He played baritone horn in the high school band. He then attended NC State University where he continued playing trombone in a dance band, marching band, and sang in Men's Glee Club. He received a B.S. in Nuclear Engineering in 1960 and was known as 'the kid' as he was much younger than his classmates. Much support for his education was in part to a special scholarship program arranged by Dave Steel where he worked summers and after graduation. Because jobs were scarce for nuclear engineers, he went in the US Army Reserve. His company of the 391st Combat Engineers was activated during the Berlin Crisis, and he continued training at Fort Benning which he participated in Atomic Demolitions /Munitions training. In 1962, he started with DuPont as an engineer at the Savannah River project and served as a reactor department shift supervisor. In 1969, he went to work for Georgia Power Company at Plant McDonough in Atlanta, GA, and in 1970, become the reactor engineer at Edwin I. Hatch Nuclear Plant near Baxley, Georgia. He served as Plant Manager of Plant Alvin Vogtle near Augusta, GA, and as Plant Manager at Hatch Nuclear Plant from 1982 to 1990. He moved to Birmingham, AL, and served as the General Manager of Nuclear Support for over five years until retiring in early 1996. He then retired to land where his great-grandparents once resided. He was highly regarded in the nuclear power industry and helped achieve excellent safety ratings at the Hatch facility. He had an integral role in the establishment of Southeastern Technical College in Vidalia, GA. He is preceded in death by his wife, Lynda Ellington Nix, in 2006, and survived by his current wife, Vivian Elizabeth Sitton-Nix. Survived by: son, Dr. Robert Jay Nix, and his fiancé, Amber Seals of Sherwood, Oregon, and son, Harvey C. Nix III, PA-C of Hendersonville and his wife Leslie, and three grandchildren, Dalton, Ethan, and Ryan. Also, step-son, Victor Sitton of Raleigh, NC and Stephanie, his wife, their children, Alec and Lindsay; step-daughter, Natalie Causby of Atlanta, GA and David, her husband, and their children, Brynley Thomas and Gracie Causby. Also survived by his sister, Norma Jean Rogers, and brother, Daniel Nix and his wife, Debbie, both of Asheville; and brother, Larry Nix, and his wife, Katie, of Rockville, MD. H.C. was a voracious reader and had expansive knowledge in economics, history, astronomy, and politics. He once campaigned for Elect Barry Goldwater for President. His interests in music ranged from Classical to Country, such as Placido Domingo and Merle Haggard. He was an active member of First UMC of Rutherfordton, NC and was a member of Fellowship Sunday School class, served on the administrative council, and enjoyed the "In As Much" activity. He supported R-S High School ROTC Sharp Shooters. He was a staunch supporter of the Republican Party and the National Rifle Association. Family will receive friends from 6:00 to 8:00 pm Monday, July 11, at West Asheville Groce Funeral Home on Patton Avenue. Funeral Services will be held at 3:00pm on Tuesday, July 12, at First UMC, 264 N. Main Street, in Rutherfordton, NC. Refreshments will be provided in the social hall. Burial will follow at Tweed's Chapel Cemetery in Fairview, NC. Memorials may be made to Word of Faith Christian (WFCS) Holocaust Museum in c/o Word of Faith Fellowship, 207 Old Flynn Road, Spindale, NC 28160.