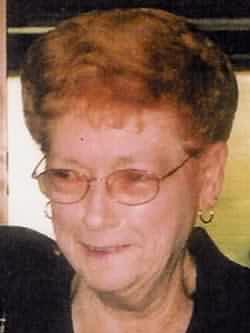 HAZEL C. GRANT Hazel Christopher Grant, 81, beloved mother and grandmother, passed away Monday, November 2, 2003, at her son and daughter-in-law’s home where she was residing since her illness. The daughter of the late Charles and Mamie Haney Christopher, Mrs. Grant was born in 1921 in Canton, NC. After completing business school in 1940, she worked for the Civil Service out of Charlotte for five years. She then moved to Asheville, married in 1947, and went to beauty school in the same year. She was a hairdresser for 55 years and was still active until her illness in December, 2002. She is survived by her son, Chris Grant and his wife Gayle of Alexander; granddaughter Annette Wilson of Fletcher; grandson Donnie Grant of Sylva; two step-grandchildren Beth Huscusson of Hendersonville and Amy West of Asheville; two great-grandchildren Chad and Andrew; four step-great-grandchildren Brittanie, Russell, Brandon and Hayley; a sister Marjorie (Clyde) LeFevers and brother-in-law Clinton LeFevers of Salisbury; nieces and nephews and many loving friends. She was preceded in death by her son Hal Grant and her husband Donald Grant, three sisters and four brothers. She was a true inspiration to her family and friends and will be dearly missed. Per her wishes, arrangements through Groce Funeral Home on Patton Avenue will be private. The family requests that any memorials be made to Mountain Area Hospice, PO Box 25338, Asheville, NC 28813, and the family expresses special appreciation to Hospice staff for all their expert care and support.