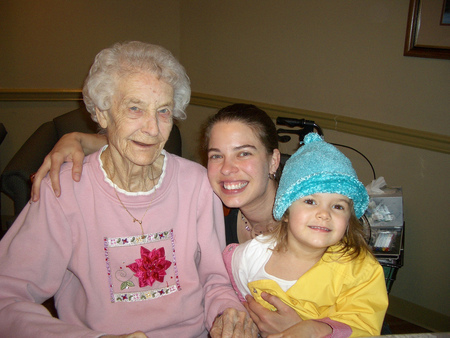 Hazel Frances Lampe Kettenbach, 95, formerly of 650 Caribou Rd., Apt. 212, Asheville, died on Wednesday, July 16, 2008 at Aston Park Health Care Center. A native of St. Louis Co., MO, she was a daughter of the late Herman and Mary Diesterhaus Lampe. She was also preceded in death by her husband, Harry E. Kettenbach, who died in 1989. Mrs. Kettenbach was of the Catholic faith, and had been a member of the Church of the Holy Family, in New Haven, MO. Mrs. Kettenbach is survived by her daughter, Carol Wagner and husband Alan, of Weaverville; foster-son, Jim Williams and wife Pat, of St. Louis, MO; sister, Ruth Lewis, of St. Louis; grandchildren, Heather Bullman, Angela Wagner, and Allana Wagner Robinson; great-grandchildren, Korie Wagner, Hannah Bullman, Konner Robinson, Zachary Bullman, and Kolten Robinson; and several nieces and nephews from the St. Louis area. A memorial service for Mrs. Kettenbach will be held at a later date at the Church of the Holy Family, in New Haven, MO. Memorials may be made to Mountain Care for Senior Citizens, 68 Sweeten Creek Rd., Asheville, NC 28803. The family expresses thanks to the staff of Aston Park Health Care Center for their love and extended care for Mrs. Kettenbach.