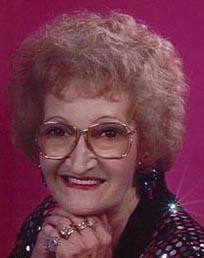 Mrs. Rhodes was a member of Moose Lodge #781 of Asheville and was of the Baptist faith.

Services will be held Sunday, June 3, 2001 at 3:00 PM in the chapel of Groce Funeral Home at Lake Julian on Long Shoals Road. Reverend Raymond Johns will officiate. Interment will follow in New Salem Cemetery.

The family will receive friends from 5:30 until 7:30 PM Saturday at the funeral home.