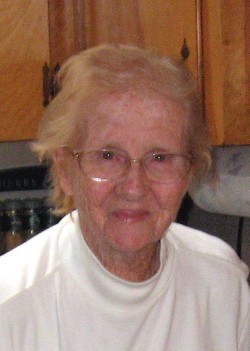 Helen Brock Massie, passed from this Earth on Wednesday, February 24, 2016. Born on May 19, 1921, to the late Andrew J. and Elsie Mae Henson Brock, she was preceded in death by her husband of 60 years, Kelly B. Massie, who died in 2001; brothers, Warren and Grady Brock; and two sibling granddaughters, Vicky and Renae Massie. She was a lifelong resident of Candler and a member of Browns View United Methodist Church. Mrs. Massie leaves her sons, J. B. Massie and wife Anne, Bobby Massie and wife Brinda, and William Massie; daughter, Barbara Lindberg; seven grandchildren; and six great-grandchildren. Our mother was so sweet, giving and loving. We will all see her in Heaven. The graveside service for Mrs. Massie will be at 3:00 p.m. on Friday at Forest Lawn Memorial Park with the Rev. Ed Worley officiating. In lieu of flowers, memorials may be made to CarePartners Hospice, P.O. Box 25338, Asheville, NC 28813. Groce Funeral Home on Patton Ave. is assisting the family.