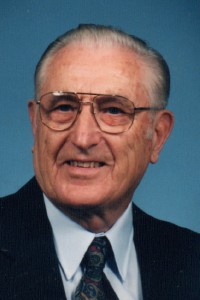 Herman Henry Messer, 90, of 7 Parkview Drive, Candler, died Thursday, September 10, 2009. Mr. Messer was born in Delta, Alabama and was a son of the late James Henry and Martha Ginn Messer. He was also preceded in death by brothers, O.B., Elmer, A.G., Clarence, D.C., Erdele, and Melvin Messer and sister, Addie Mae Johnson. He served in the South Pacific with the US Army during WW II and was a retired division manager for Sears. He was an active member of Acton United Methodist Church for 64 years, where he served on the Administrative Board and was a Sunday school teacher, youth leader, Trustee, and member of the United Methodist Men. He also served on the Residents' Board at Pisgah Estates Condominium Association. Mr. Messer was an avid cook, trout fisherman and gardener. He is survived by his beloved wife of 64 years, Lillian Messer; one daughter, Linda Messer Clements and her husband, Bob, of Dacula, GA; two grandchildren, Bradford Clements and Kelly Clements Snow and her husband Joshua, of Lawrenceville, GA; and one sister Annie Rae Miller of Lineville, AL. Funeral services will be at 3:00 p.m. Sunday at Acton United Methodist Church with the Rev. Jeane S. Walker officiating. Interment will follow in the church cemetery. The family will receive friends at the church following the service. Memorials may be made to Acton United Methodist Church, 171 Sand Hill School Road, Asheville, NC 28806, or to CarePartners Hospice, PO Box 25338, Asheville, NC 28813. Groce Funeral Home on Patton Avenue is assisting with the arrangements.