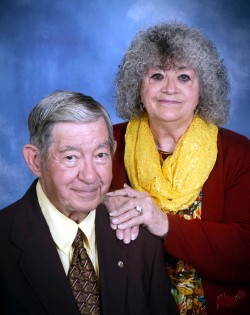 Hermon H Rector Sr. passed quietly into the arms of Jesus on Sunday January 16, 2022 at home after a long fought battle with Myasthenia Gravis.

Hermon was born August 22, 1937 in Madison County to the late Tommy and Mary Dobbins Rector. He was preceded in death by his wife of 65 years Shirley Brown Rector; daughter, Lavonda Rector Rickman; brothers, Jerry Rector and Donald Rector; and son-in-law, Ronnie Brown.

Hermon graduated from Marshall High School in 1954 and from AB Technical School in 1966. He worked for the state of North Carolina in the Natural Resources and Community Development Department. Retiring in 2001 after 34 years of service. Through the years Hermon worked many second jobs making sure that he provided for his family. One of those jobs was with Young’s Transportation where he drove chartered buses. Often regaling family with tales of hairpin turns and steep mountain grades. During retirement he and Shirley enjoyed traveling and flower gardening, filling their yard with many beautiful flowers and bushes.

Always thrifty and resourceful Hermon was a jack of all trades and willing to tackle and repair any broken appliance, change brakes, or help roof your house. That trait helped him through out life. Hermon had an outgoing personality never meeting a stranger. He had a quick wit and a snappy comeback. He loved telling stories and was always willing to share a story about his growing up years particularly with the grandchildren and great-grandchildren. They loved hearing Papaw’s stories.

Hermon was an outdoorsman. In his younger years he enjoyed hunting, fishing and hiking with his children. He taught many of the grandchildren how to cast a fishing pole and loved witnessing their first catch.

Hermon loved the Lord and took every opportunity to speak about his Lord and what He had done for him. He taught 5th grade boys Sunday School class for many years and later an Adult Sunday School class. He served as a deacon and in earlier years led an Outreach Ministry to those who are lost.

Hermon was a member of the Praise and Prayer Sunday School class and a member of West Asheville Baptist Church.

Thank you to CarePartners Hospice for their help and support.

The funeral service will be held at 6:00 p.m. Thursday in the Patton Avenue chapel of Groce Funeral Home with the Rev. Dr. Stan Welch officiating. Family burial will be Friday at Green Hills Cemetery. The family will receive friends from 4:30 until 6:00 p.m. on Thursday at the funeral home.

Flowers are appreciated but if you would like send a memorial to West Asheville Baptist Building Fund that would be appreciated as well.