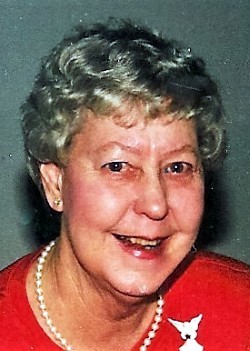 Hilda Blanche McFee Parker, 88, of Candler, died Tuesday, July 5, 2016. A native of Asheville, NC, she was a daughter of the late Glenn and Rhetta Henson McFee. She was also preceded in death by her husband, George Henry Parker. Mrs. Parker was a member of Central United Methodist Church, and the Asheville Business Women's Association. Surviving are her sons, Craig Parker and his wife, Amy, and Eric Parker and his wife, Vicki; and her grandchildren, Ryan, Alex, Meredith, Kyle, and Logan. Memorial services will be held at 11:00 a.m. on Saturday in the Patton Ave. chapel of Groce Funeral Home, with Dr. Rob Blackburn officiating. The family will receive friends one hour prior to the service. In lieu of flowers, memorials may be made to Hominy Baptist Church designated for their Daily Bread ministry, 135 Candler School Road, Candler, NC 28715.