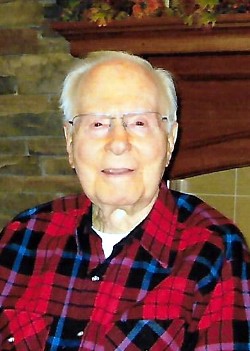 Howard Turner Davis, 94, of Hendersonville, died on Monday, July 2, 2018, at the Elizabeth House. A native of Candler, Howard was a descendant of Uriah and Rebecca Davis, 1790's settlers of the now-historic Pisgah View Ranch. He was a son of the late Tennyson and Delores Davis. He was a devoted husband for 62 years of the late Faith Keller Davis, the love of his life. He was also preceded in death by his siblings, Evelyn Davis, and Benjamin P. Davis and wife Josephine. He will be remembered as a loving Dad and Pop to his daughter and only child, Laurie Davis Henson and husband, Russ, of Hendersonville, two grandchildren, Eric Tyler Henson and wife Kristen Mansker Henson, of Inman, SC, and Clint Turner Henson, of Hendersonville; and brothers, Henry A. Davis, of Hendersonville, and Gene T. Davis, of Venton, VA. Mr. Davis comes from a family of proud American patriots, with family members having served during the American Revolution, the Civil War, WWI, WWII, and in peace time, in the U.S. Army, U.S. Air Force, and the U.S. Marine Corps. He was a WWII Marine, serving in the South Pacific as an aircraft mechanic. He participated in the assault and occupation of Peleliu Island, Palau Islands, and later in the Marine Active Reserves at Cherry Point, NC, during the Korean Conflict. Mr. Davis was a driver for Greyhound Lines Co. for 38 years. He was a member of West Asheville Baptist Church. A humble man of great compassion and integrity, his ready wit, impeccable manners and easy going nature made him special to all who knew him. The funeral service will be at 2:00 p.m. on Thursday in the Patton Avenue chapel of Groce Funeral Home with Pastor Steve Scoggins, First Baptist Hendersonville, officiating. Interment will military honors will follow at Forest Lawn Memorial Park. His family will receive friends for one hour prior to the service at the funeral home.