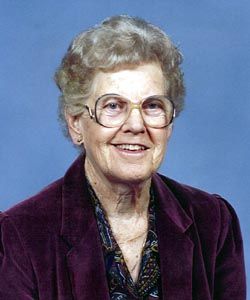 Mrs. Dumas was a native of Chester, SC but lived most of her life in Buncombe County. She was a daughter of the late John A. and Hannah Allen Lipford and was the wife of the late Millard A. Dumas Jr. who died in 1982. She was a member of the Avery’s Creek Home Demonstration Club, the Winnebago Motor Club, the Good Sams Club, the Valley Springs Grange and Long Shoals Baptist Church, where she was a member of the Women’s Missionary Union.

Funeral services will be held Saturday, May 6, 2000 at 3:00 pm in Long Shoals Baptist Church with the Revs. Roger Rearden and Ed Houk officiating. The family will receive friends one hour prior to the service at the church.

Interment will be in Green Hills Cemetery.