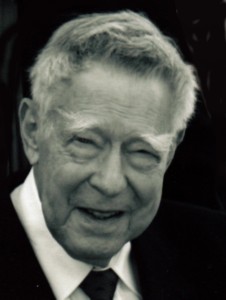 John William Russell, Jr., 84, of 124 Liberty Rd., Candler died Thursday, September 4, 2008 at Mission Hospital following complications from a diagnostic procedure. Bill was born in Cabot, Arkansas November 19, 1923. His parents moved to Candler when he was two, and he was a resident of Candler for the rest of his life. He was a lifelong member of Francis Asbury United Methodist Church, which he supported with long service including serving as chair of the building committee. He was active at the district and conference levels of the United Methodist Church as well. Bill was graduated from Candler High School, and attended Brevard College for a year, where he met his future bride of 61 years, Marjorie Leigh Duranso. When the U.S. entered World War II, he left Brevard College and worked for the defense industry until his 19th birthday, when he entered the United States Marine Corps. He served in the South Pacific with Company K, 3rd Battalion, 22nd Marines, Sixth Marine Division. He served as enlisted aide to Lt. Col. Wallace M. Greene, Jr. on Saipan. Col. Greene went on in later years to become Commandant of the Marine Corps. Bill's service continued through the island hopping campaign and the Okinawa campaign. Following WW II, Bill returned to North Carolina, where he and Marjorie married. He entered UNC-Chapel Hill on the G.I. Bill, where he was graduated with a Bachelor of Arts degree in 1948 and from law school with a Juris Doctor degree in 1950. Bill Russell returned home to Candler to practice law with the law firm of Uzzell & Dumont. For the past 25 years, he has led the law firm of Russell & King, P.A. During his career, he engaged in almost every realm of the law and clearly loved the practice thereof. In 2000, the 26th District Bar Association recognized him for 50 years of continuous service to the legal community. He was subsequently elected to the North Carolina Bar Association Hall of Fame in Myrtle Beach, South Carolina, where all of his staff and family honored him, along with the bar. Also, Bill was honored throughout his professional career by maintaining a Av rating from Martindale-Hubbell for the majority of his years of practice, and also was named one of The Best Lawyers in America by his peers. He was known throughout the bar for his gentlemanly conduct, his true professionalism, and his ability to bring a case to mind along with the reporter in which it could be found. He achieved his highest wish, which was to practice law up to the day before his death. He was a consummate lawyer. He was a lifelong trout fisherman, beginning in 1939 on Cataloochee Creek. His love of the sport and the friends he made along the way was a joy to him. He was an engaging storyteller, and his tales of fishing and friends enlivened many a creek bank and campfire. He enjoyed fishing in North Carolina, Montana, Idaho, and on the Babine River in British Columbia. He was a founding member of the Land O' Sky chapter of Trout Unlimited, and was a conservationist years before it was fashionable. Bill was a lover of Shakespeare and the classics, a college friend of Kermit Hunter (author of Unto These Hills), a former counsel to the Cherokee Historical Association, and a lover of outdoor drama. He is survived by his wife, Marjorie Russell of Clare Bridge of Asheville: brother Walter R. Russell of Houston TX; son John W. Russell III of Candler; son Walter G. Russell of Candler and his wife Cathy; grandson John W. Russell IV of Rock Hill, SC and his wife Candie and sons Ethan and Joshua; granddaughter Jennalee Sexton of Candler and her husband Mike; grandson Zachary Russell of Brevard and his wife Promise, cousin Shirley White of Candler, and his law partner and friend of many years, Sandra M. King. A memorial service will be held to celebrate his life and accomplishments on Thursday, September 11 at 2:00 PM at Francis Asbury United Methodist Church on Asbury Rd, Candler. The family will receive friends at the church following the service. Memorials may be made to Pisgah Legal Services, 89 Montford Avenue, Asheville, NC 28801, or to Francis Asbury United Methodist Church, P.O. Box 67, Candler, NC 28715. The family would like to extend their gratitude to his outstanding medical team, who worked with him for many years to enable him to continue serving the community. He fought his heart disease to the end and lived his life as Dylan Thomas wrote, "Do not go gentle into that good night." Groce Funeral Home on Patton Avenue is assisting with the arrangements.