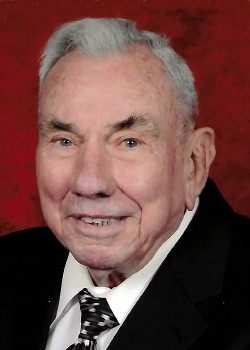 Jack Ray Ferguson passed away May 6, 2020, at Seacoast Hospital, Little River, SC, with his family by his side.

Jack Ray was born in Haywood County on February 5, 1927, to the late Thomas W. Ferguson and Maggie Stevenson Ferguson.

He was a member of Hominy Baptist Church for over 60 years and very dedicated to his church.

He attended Blanton’s Business College and served in the US Army from 1951-1953 in the 10th Armored Division, 2nd Bn. 278th Regimental Combat Team.

He worked briefly at American Enka, then spent a lifetime career at Lowe’s Home Improvement. He was the former Assistant Manager at Asheville, and retired as Manager of Lowe’s Hendersonville store.

He was the former Chairman of the Board of Wilkes National Bank, and he was a member and Past Master of Hominy Masonic Lodge #491; member of Oasis Shriners and Hendersonville Shrine Club and Candler Lions Club. He was also Past Patron of Electa Chapter No. 228, Order of Eastern Star.

He received an honorary Doctorate of Humane Letters from Mars Hill University and Asheville Buncombe Technical College. He was presented The Order of the Long Leaf Pine from the State of North Carolina for philanthropic giving.

He will be remembered for his philanthropic generosity to AB Tech, Mars Hill University, ABCCM, YMCA, Memorial Mission Cancer Center, Hominy Baptist Church and other charities throughout Western North Carolina.

The funeral service will be held at 2:00 p.m. on Monday, May 11 at Hominy Baptist Church, with the Rev. Dr. Joe Yelton, Rev. Dr. Paul Raybon and Rev. Melissa Hughes officiating. Burial will follow in the church cemetery. Due to COVID 19 restrictions, there may be no more than 50 people gathered for his service at the church and no more than 50 people gathered for the graveside.

In lieu of flowers, memorials may be made to the Baptist Children’s Home at Clyde and to the Hominy Baptist Church Endowment Fund.

Mr. Ferguson’s service will be streamed live at 2:00 p.m. Monday at Facebook.com/HominyBaptistChurch.