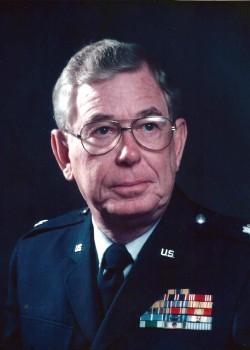 James Bernard Coward, 91, beloved husband, father, grandfather and friend died peacefully Monday, January 5, 2015, at the North Carolina State Veteran's Home, in Black Mountain. Jim was born on January 10, 1923 in Asheville, NC, to the late Billy Nathan Coward and Gertrude Martin Coward. He is predeceased by his brother Shannon Coward. Jim graduated from Lee H. Edwards, now Asheville High School in 1940. He began his military career in December of 1942, volunteering for the U.S. Army and serving in the Signal Corps, later attached to the 17th Airborne Division. He landed in France shortly after D-Day, saw action in the Falaise pocket, the Battle of the Bulge and the subsequent push into Germany. He attended North Carolina State University on the GI Bill, graduating with a degree in Industrial Engineering in June, 1950. While at school, he was commissioned as a Second Lieutenant in the U.S. Air Force Reserve. Jim was recalled to active duty, assigned to the Air Force Security Service in 1951, serving in Korea, Japan, and Okinawa, where he was wounded in combat. Jim remained active in the U.S. Air Force reserves for 30 years, serving in positions of increasing responsibility, and retiring as Lieutenant Colonel in 1983. He received a number of commendations during his long career for outstanding professionalism, dedication to duty, and leadership. He was especially instrumental in the success of the Aeronautical Systems Division Reserve Program of the Air Force Systems Command at Wright Patterson Air Force base during his tenure. After his retirement, he served for many years as the western North Carolina liaison officer for the U.S. Air Force Academy, taking great pride in each successful applicant. Jim worked as a systems and industrial engineer in various industries, retiring from Champion International Corporation in Canton, NC, in 1985 after 20 years of service. While there he was responsible for a great deal of modernization and instrumental in the process automation of paper machines. A dedicated and loving father and husband to the end, he is survived by his wife of 68 years, Ruth Sugg Coward, of Arden, NC; four children: Jane Coward Sales and husband Robert Sales, of Savannah, GA; Beth Coward Lindsey and significant other John Hribar, of Durham, NC; James B. Coward, Jr. and significant other Linda Page, of Old Lyme, CT; and John Matthew Coward and wife Jasmine Baleva Coward, of Baltimore, MD. He is also survived by two grandchildren, Anna Kelly Sales and husband Charles, of Savannah, GA and Robert Alexander Sales and wife Chantal, of Charlotte, NC, and two well-loved great-grandchildren, Evan and Emery Sales, ages 7 and 5; and brother, Bill Coward and wife Sherry, of Asheville. He will be missed as well by a large extended family including many nieces and nephews. Jim loved people and was never at a loss for words. He never worried about the little things in life, having survived two wars. Jim delighted in the accomplishments of his children, making sure that education was valued from an early age. He was a hands-on dad, watching a lot of sports and cheerleading in his time, teaching his kids to drive, and helping with math homework. He loved spending time in his yard and he also loved having a beer on the patio and discussing life when his children became adults. He also volunteered as a math tutor for elementary school students in Canton upon his retirement. Jim adored dancing all his life, had fun doing the jitterbug with his wife and took shag lessons in his 70s. He danced at the weddings of his grandchildren and at the wedding of his niece at 88. His kindness and love of others was always present. He was a lover of animals and always had room for any stray brought home by his children. Later in life, he could be found watching TV - especially NC State sports - accompanied by one of his many cats, two of whom survive him, Sweetie Pie and Scruffy. A military funeral service will be held on Friday, January 9 at 10:30 a.m. in the First Baptist Church on Academy Street in Canton, NC, where Jim was a long-time member. Pastor Jay Meadows will officiate. The family will receive friends following the service at Ardenwoods Retirement Community. In lieu of flowers, the family would like contributions made to the Salvation Army or to Sarge's Animal Rescue Foundation at 256 Industrial Park Drive, Waynesville, NC 28786. The Salvation Army held a special place in Jim's heart as he always remembered how they served hot coffee and doughnuts to the troops coming off the battle fields in WWII.