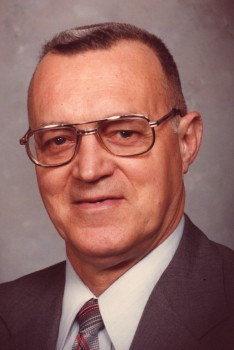 James Bryan “Jack” Herren, 93, of Candler, died on Monday, December 28, 2009, at his residence. Mr. Herren was a native of Gaston Co., NC. He was preceded in death by his wife Judith Virginia Saunders Herren, who died in 2008, and by his sister, Juanita C. Young. Mr. Herren had worked as a supervisor at American Enka for 38 years. He was a veteran of the U.S. Army. Jack was a hard working and independent man always willing to help family, friends, or that in need. He is survived by his son and daughter-in-law, Darrian N. and Shirley Herren, of Candler; granddaughter, Michelle Anderson and husband Andy, of Candler; grandson, Shannon Herren and wife Julie, of Candler; and great-grandchildren, Matthew, Kayla and Drew Anderson, Tyler and Olivia Davis, and Grant Herren. A funeral service will be at 2:00 p.m. Wednesday at Hominy Baptist Church with the Rev. Dr. Fred Werhan officiating. Interment will follow in the church’s cemetery. His family will receive friends for one hour prior to the service at the church. The family wishes to express their thanks and gratitude for all of the loving care and support from Mary Burgess, CarePartners Hospice, and the employees of Precision Products. Memorials may be made to the Hominy Baptist Church Cemetery Fund, 135 Candler School Rd., Candler, NC 28715, or to CarePartners Hospice, P.O. Box 25338, Asheville, NC 28813.