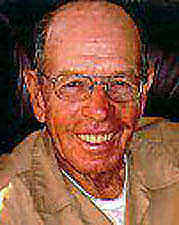 James Daniel Caldwell, 75, of Big Sandy Mush, Leicester, died Friday, October 24, 2008. Mr. Caldwell was a native of Madison County and was a son of the late Richard and Fairre Payne Caldwell. He was also preceded in death by a son, John Daniel Caldwell, a sister, Edie Parke, and brothers, Andrew Ray Caldwell and Hubert Caldwell. Mr. Caldwell was a lifelong farmer. He loved farming and was always smiling. All who knew him well will miss him. He was a member of Ebenezer Baptist Church. He is survived by his wife of 56 years, Ruby Rathbone Caldwell; one daughter, Joann Karn and husband, Melvin; one son, Ronnie Caldwell and wife, Becky; four sisters, Mae Justice, Ella Mann, Mildred Morrow, and Lillian Turner; five grandchildren and one great-grandchild. The funeral service will be at 2:00 p.m. Monday in the Patton Avenue chapel of Groce Funeral Home with the Revs. Gene Turner and Dan Blackwell officiating. Burial will follow at Ebenezer Baptist Church Cemetery. His family will receive friends from 6:00 – 8:00 p.m. Sunday at the funeral home and at other times friends may call at the residence. Memorials may be made to Ebenezer Baptist Church Cemetery Fund, c/o Mike Duckett, 428 Willow Creek Road, Leicester, NC 28748.