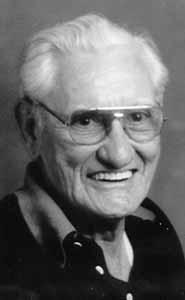 A lifelong resident of Asheville, Mr. Duckett was born on July 22, 1914, the oldest child of the late Herbert and Johnnie Wright Duckett. He was preceded in death by his first wife, Ruby Carson, and a son, James Franklin Duckett. He retired in 1977 from American Enka Corporation after 41 years of service. His major occupation after retirement was moving his church, Malvern Hills Baptist Church, to a new location and erecting a new church building at the corner of Middlemont and Sulpher Springs Roads.

Funeral services will be at 2:00 pm Monday, January 3, 2000, in the Patton Avenue chapel of Groce Funeral Home with the Reverend Bob McKinney officiating. Interment will be in the family burial plot at Pisgah View Memorial Park.

His family will receive friends at the funeral home one hour before the service.

In lieu of flowers memorials may be made to Mountain Area Hospice, PO Box 16, Asheville, NC 28816.