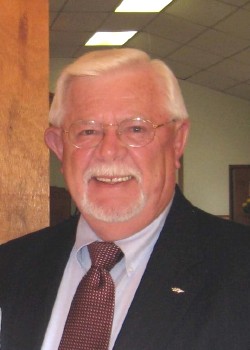 Raised in the “Chicken Hill” area of Asheville, Earl was a son of the late James and Dorothy Wise. He was also preceded in death by his wife, Mary Alexander Wise, and his brother, Richard Wise.

Mr. Wise was an alumnus of Western Carolina University. He began his career as the budget/financial director for the American Enka Plant, and then worked in human resources for BASF until his first retirement. He then worked as bridge engineer/material inspector for the NCDOT.

He was a lifelong Mason, Shriner, Lion’s Club and Enka-Candler Fire and Rescue Department member. He was active in local politics, mentor programs with local elementary schools, at his church, Oak Hill United Methodist, and played Santa for the Marjorie McCune Center.

Mr. Wise received several awards for humanitarian services, Shriner of the Year award, and many more. He was the former president of the Lion’s Club of NC. He was also involved with youth football, community youth programs, the school board, and the Boy Scouts of America.

Earl was a proud father and grandfather, and took great pride in helping children.

Surviving are his son, David Wise, of the home; daughters, Tammy Wise (Jeff) of Largo, FL and Tracie Wise of Whittier, NC; step-daughter, Aimee W. Coulter (Jamie) of Shelby, NC; 12 grandchildren and numerous great-grandchildren; nephews Richard Wise and Joe Wise and their families; and niece Linda Wise and her family.

In lieu of flowers, memorials may be made to Shriners Hospitals for Children, Attn: Processing Center, PO Box 947765, Atlanta, GA 30394.